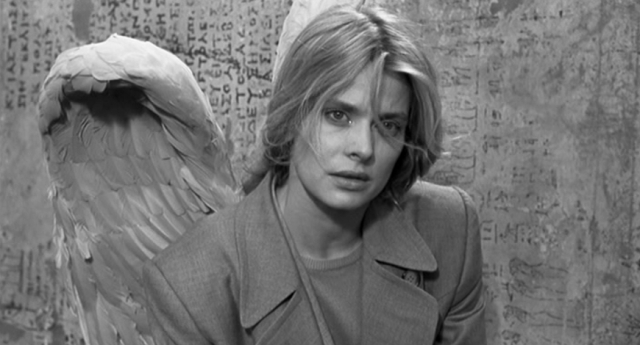 By the way, I wrote around 3,500 words about stand-up comedy for Vulture recently. Read it here. Follow @halfacanyon for more.

A made-for-Netflix movie before such a thing existed. For Game Night die-hards only.

I watched it to prepare for my interview with Agnès Varda (which can be read here). 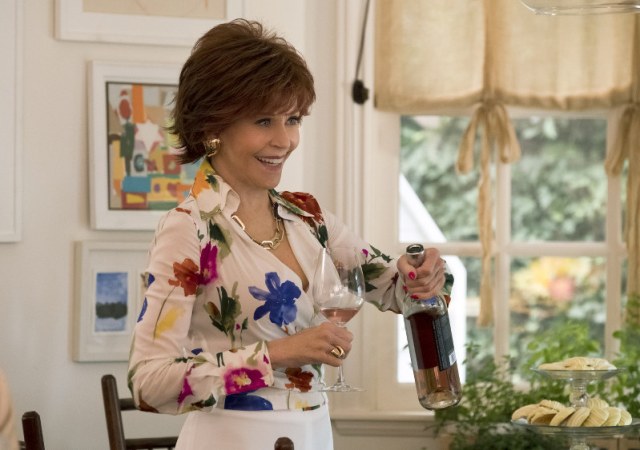 I did laugh a lot when paperbacks for the 50 Shades sequels were dished out.

Here’s a bold way of shooting a film: completely improvised dialogue that, for at least 30 minutes, emphasises the dull daily routines of Arterton’s stay-at-home mother. What’s more, she suffers from depression (never mentioned), is fed up with her kids (is mentioned, and then un-mentioned), and simply endures the sexual advances of her husband.

So the actual escape, when it arrives, offers salvation for the viewer, too, as Arterton flees her family for a one-night-stand in France. It’s only until two-thirds into proceedings when you’re unable to second-guess what’s going on, and the drama enters new territory – a heady mix of guilt, fairytale fantasy, and self-hatred. Still, you have to say it quietly: the film is kinda boring. (And if you do, make sure it’s unscripted and played for naturalism.)

My interview with JR and Agnès Varda can be read here. 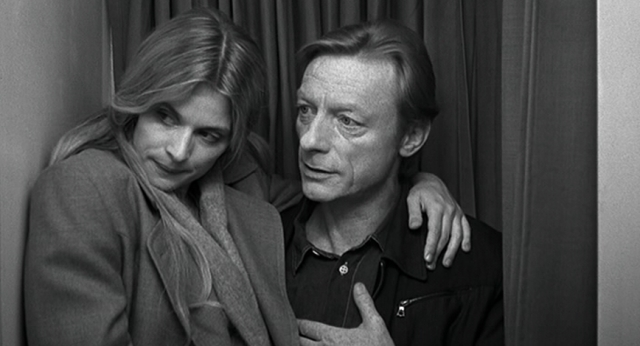 According to Wenders’ DVD commentary, the angels from Wings of Desire are metaphors but in Faraway, So Close! they exist in the more religious sense. I’m not entirely sure of this, but I kind of go along with it, just as I accept Willem Dafoe as Emit Flesti (“Time Itself” spelled backwards) and everything else about this lovable mess of a sequel.

I sort of get it. Berlin, now united, mirrors two angels entering the human realm. The purest emotions are derived from wanting to be alive, taking pleasure in coffee, and enduring disgusting alcohol in public places out of peer pressure. But as Cassiel sadly informs Raphaella, all that blood pumping through the veins is coupled with overpowering melancholy. In short, life could be bliss, but it’s awful, and here’s a freewheeling explanation that somehow turns into a heist movie towards the end.

I watched this during the sweltering, punshing heat wave of 2018. A sign of things to come? Well, Schrader has hinted this will be his final film. But First Reformed really soars (aside from one literal sequence) when it tackles global warming. Or, more specifically, how we’re doomed, and the absurdity of watching everyone just go about their lives as if it might be God’s plan. At the very least, Lark’s plan in the new Mission Impossible seems less far-fetched if you double-bill it with First Reformed.

As loyal listeners of Todd Barry’s podcast will know, comedians who open for musicians tend to go through hell. Also, loyal listeners of any comedy podcast will know that every stand-up wants to be a musician, and vice-versa. So Grace’s extremely watchable road movie – two friends, a singer-songwriter and comic, go on tour – already has something go from it, but then a love triangle ensues when Bryn joins for the ride. Though not groundbreaking, it’s a warm, charming ode to chasing your creative dreams while your life crumbles around you and you’re just some person on a laptop writing out a blog post and waiting to die.

The one thing we can agree on, I feel pretty sure, is that the film is unspectacular, and that most of the intrigue is spent wondering if the film is, in fact, problemaltic. There’s a nice, if perhaps tired and offensively naive, idea underneath. Schumer’s character hits her head and believes she has the supermodel looks of, say, Emily Ratajkowski’s character. So she bags Rory Scovel as a love interest, she enters bikini contests, and maybe she can star in the fictional movie’s equivalent of Trainwreck!

The conclusion, though, is that she could have achieved all this anyway just by tricking herself into being a confident person. Or maybe it’s that happiness is only possible through severe concussion, and that life is so meaningless, it’s amazing we participate in it at all, let alone setaside time for SoulCycle classes.

A Hitchcock thriller without the mystery, Leconte’s oddball love story traps its central duo in a lawyer’s office. Bonnaire expects a psychiatrist, but instead she pours her intimate secrets to Luchini, a fidgety lawyer. To the film’s credit, the cat-and-mouse frisson continues beyond the point where Luchini reveals his true profession, and the second act is full of intrigue and possibility – where does one go from here?

Nowhere particularly satisfying, it must be said, given the potential of two top actors who bring humour, nervous flirtation and raw emotions to what is mostly just two people chatting over a desk. Still, it’s certainly a step up from Monsieur Hire, another Leconte movie about a weird man perving on women through his window.

I’m full of admiration for what’s probably the most convoluted murder mystery I’ve ever seen. Just when I thought the ludicrous plot was wrapped up and had stretched its credulity too far, I realised there was another 35 minutes and about 35 twists still to come. Read nothing in advance – not even this sentence!

My interview with Debra Granik can be read here.

Observe and Report had the misfortune of hitting cinemas around the same time as Pall Mart Mall Cop. However, even Kevin James isn’t sinking as low as Hill’s Deer Hunter (which is, thankfully, about half the length of the other Deer Hunter movie). The first misstep from the Hill/McBride partnership, this straight-to-Netflix comedy feels like a failed pilot. The casting, the tone, the humour, the plot, it all feels rushed and plain wrong – as if a wolf ate the script and ideas, and they were left to salvage the remains into 85 minutes of material. 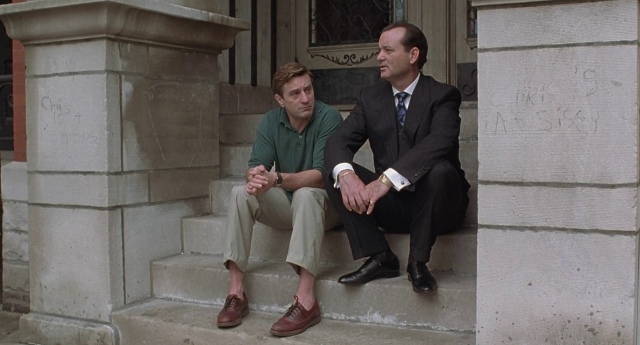 An experiment in casting: what if Murray embodies a tough-talking gangster mobster, and De Niro plays a meek, lonely romantic? Unfortunately, neither are suited for their role, and the film loses its convictions with a cop-out ending – inserted after test audiences wanted a happier ending and more likeable characters. (I guess they couldn’t shoot the whole thing.) Thurman’s plot, too, strikes me as odd, given how her undeveloped role – a “seven-day singing telegram” – receives less scrutiny than Murray’s stand-up set. 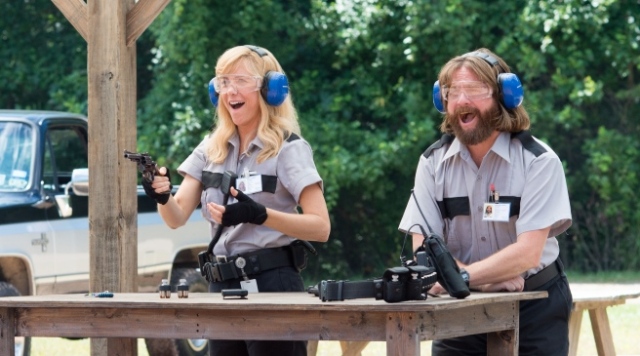 Zach receives plenty of kudos for his hatred of press and social media. I’m pretty sure he’s just embarrassed by his film roles.

My interview with Desiree Akhavan can be found here.

At some point, I’m expecting the Mission: Impossible franchise to pull off its mask and reveal that it’s a big advert for Scientology. And if the franchise keeps up this pace, I’m in! At least, that’s why I think there’s a reference to Ethan Hunt’s ex-wife turning into a “ghost” (aka thetan) in Fallout.

A spiteful romantic comedy that’s like wine: it’s sharp, bitter, and improves with age if you, too, are sad, pathetic and hellbent on wrecking the best day of former friends’ lives.

Surprisingly sweet and gentle, with a heart the size of a giant iceberg, and with the best of its many terrible gags being that the two titanically charismatic leads are called Kate and Leo. Get it? It’s like Kate & Leopold.

Like Phantom Thread, it’s a comedy, brimming with repressed emotions and fucked-up relationships. I don’t quite buy the Hopkins/Thompson romance, though, particularly the regret as she stares longingly from a departing bus.

Want to know what it’s about? Look it up on Bing.

That Renner didn’t invite his best friends to his wedding because of a long-running game of tag is funny. Sorry.

Like cooking an omelette with your finest, Oscar-winning ingredients then realising, just before you eat it, that there were no eggs in the first place. And for some reason, Mark Duplass wants a bite. 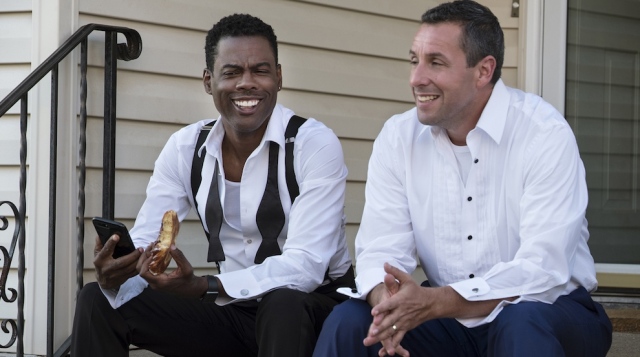 The Week Of details a conflict-free week between two families (Sandler and Rock are the two fathers) in the leadup to a wedding. Now, I know what you’re thinking (I don’t, I’m not a mind-reader) but it’s not Grown Ups. Nor is it Grown Ups 2. It also isn’t Grown Ups 3, while we’re at it.

For Smigel, in his debut feature, aims for something more low-key and natural – say, 70% Meyerowitz, 30% Billy Madison. As such, the film’s brief descents into puerile or immature humour (Sandler in drag, Rock’s sex dream) offers a genuine change of pace. And, sorry, the strip club scene here is funnier than the strip club scene in Top Five.

A Japanese screwball comedy with a hint of Frasier and Billy Wilder in its slick, frantic pacing. Though mostly set in one building, the premise never gets old; the chaos builds and builds, and saying too much will spoil the surprises. Track it down.