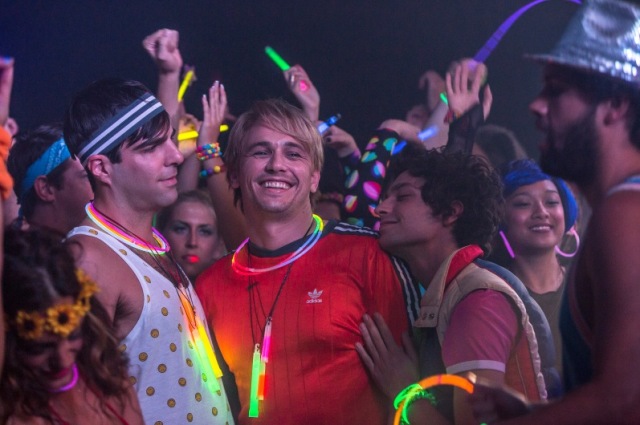 Based on a New York Times Magazine article titled My Ex-Gay Friend, the drama begins with a younger Michael. (That might be the dumbest, most obvious sentence I’ll ever write, but please stick with me.) He dates handsome Bennett (Zachary Quino), dyes his hair, and works on XY, a magazine aimed at a young gay demographic who feel ostracised by the media. So far, so good. What shakes things up – aside from flat flashbacks involving his mother’s ashes – is a series of panic attacks that are a sign, according to Michael, that there’s all is now well inside.

In contrast to expectations, I Am Michael is subtle in its approach and avoids editorialising its protagonist’s actions in an obvious manner. When Michael publicly declares homosexuality as “abnormal”, the gay community – from Bennett to the magazine’s teens readers – are outraged and, frankly, confused. It wracks everyone’s mind why Michael would set off to Wyoming to become a pastor. But the film is still sympathetic to its lead, even when his newfound religious persona is clearly hindered by doubt and no one with whom he can speak honestly. His defeatist speeches (“If being gay get in the way of being my true self, I can’t get close to God”) sound like he’s unsuccessfully trying to convince himself. Or maybe the confusion is Franco trying to remind himself of which script he’s performing amidst a busy schedule. Either way, it works.

With Michael’s motivations left foggy, the viewer is denied the big, obvious scenes Hollywood has conditioned us to expect. Even if the film is oddly flat at the time, Franco’s presence is engaging – even through counting the exclamation marks in his Skype messages. When Michael attempts to break his homosexuality by flirting with a pretty Bible student (Palo Alto co-star Emma Roberts), there’s no turning back. Disowned by the gay community, he’s stuck in Wyoming, training to be a pastor, hoping no one Googles his history.

The neutral approach creates a more sophisticated, thought-provoking experience that I found myself cogitating over a few days after the press screening. Franco’s nuanced role – including the mystique surround his real life sexuality – is a reminder of what an actor can do when not fed weak one-liners by Seth Rogen. My favourite moment is undoubtedly when Michael agrees to be a talking head for a documentary, leading a future GIF in the making of Franco watching himself at the cinema.

He’s still lonely, searching for a way to belong to something. “You will choose heterosexuality in order to be with God,” he advises someone over coffee. He’s changed his life in the hope that it’s easier to fit in with religious crowds than his actual friends. After years of experiencing homophobia, he joins the bullies and is, unsurprisingly, still unsatisfied.

I Am Michael is BFI Flare’s opening gala film. The festival runs 19-15 March. More information can be found here.