LFF15 Journey and Family reviews: “Youth”, “Mountains May Depart”, “Right Now, Wrong Then”, “Land of Mine” and 4 others…

Films reviewed: “The Assassin”, “Goosebumps”, “The End of the Tour”, “Land of Mine”, “Mountains May Depart”, “Murmur of the Hearts”, “Right Now, Wrong Then” and “Youth” (pictured above).

A bit like staring at the Mona Lisa and expecting it to talk, my viewing of The Assassin – a beautiful, serene look at how little there was to do before the internet – was hampered by mentally (not physically) joining the many people walking out. I’m already not a fan of kung-fu, but Hou goes further by distilling martial arts into a lingering mood, with shots that last too long and dialogue as indiscernible as whatever Woodstock’s telling Snoopy. 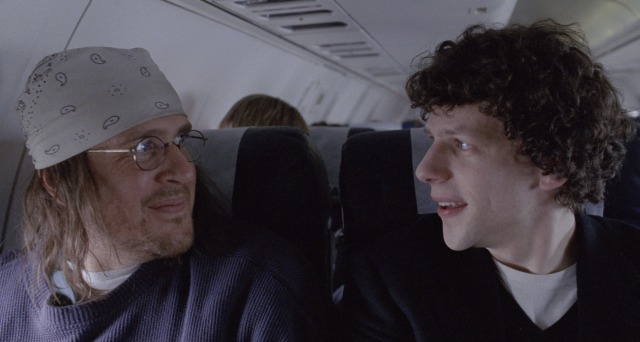 I’ve never read any David Foster Wallace and can’t remember the name of the guy Eisenberg plays, so for me this was like an NPR podcast – say, Fresh Air, when Terry Gross is on holiday – filmed for a webcam bonus. Except a podcast that had me wondering if it’s a bit wrong that it exists, generating entertainment out of a real person’s death. Oh wait, that’s Serial.

One of the characters may be R.L. Stine and the monsters may be taken from the books, but Goosebumps 3D doesn’t reflect what I remember reading as a child. Instead, it recalls, if anything, Pixels, which at least had decent visual effects to accompany its limp humour – removing swear words to target sexism at a younger crowd – and uninspiring storyline. Perhaps it was the cinema, but with 3D glasses the images are too dark, especially in night-time scenes, and I ended up removing them for a clearer look – a bit like Tom Cruise if, instead of Tom Cruise, he was a weirdo at a film for 8-year-olds. 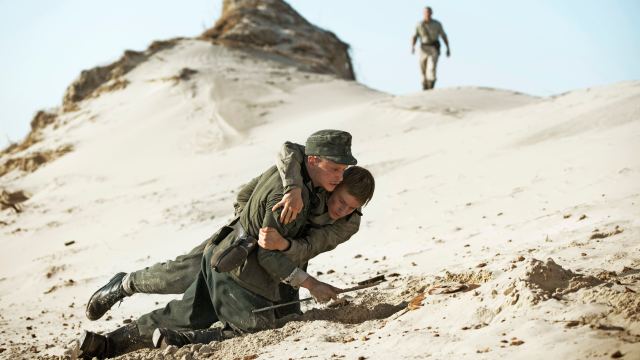 A tense period drama about teen boys defusing landmines will always deliver on some level, much in the way stories about gamblers can literally up the stakes in the final act. Based on a rarely documented period of Denmark’s post-WWII recovery, Land of Mine is a horror film of a different kind, for its young protagonists could literally be blown to bits every other scene. And, of course, each explosion is designed by director Zandvliet to be as shocking and emotionally manipulative as possible.

Set in 1945, 2.2m of the Nazis’ landmines are still scattered along the Danish west coast. To clear the beaches, German POWs are taught how to defuse these bombs (one goes off during training) with the promise of returning home once the job is done. Many are wide-eyed youngsters shepherded into the army a year before, presumably with no say in the matter – although, to the film’s credit, this is one ambiguity left untouched. The locals, however, are explicit in their hatred towards all Germans, even those who look like they belong in school. To rub it in, a sergeant reminds the POWS, “Denmark is not your friend.”

The film’s central adolescent group is managed by Sergeant Rasmussen (Møller), a stern boss who slaps any German who dares speak when not spoken to. Subsequently, little is teased out of the boys, other than rare moments when one might describe his adulthood plans – a shred of optimism that, according to sentimental movie law, is tantamount to a death wish. Some are bystanders, others are slightly less than bystanders. It may be shocking to witness a 15-year-old’s limbs shot off, but soon repetition sits in, especially which such anonymous figures.

“Assuming you defuse six mines an hour and don’t get blown up,” Rasmussen states, “you’ll be home in three months.” Statistically, it’s unlikely, especially with the lack of food. And will the promise be kept? That’s another matter. These early periods of dread are especially strong; I was still digesting the scenario and ethics, while simultaneous braced for another kaboom. But then Rasmussen changes his mind, leading to a predictable, familiar second half about empathising with the enemy.

Despite the brutal treatment – a Danish housekeeper knowingly tricks the starving boys into devouring rat excrement – and rapid death rate among the teen POWs, little sympathy is offered by the locals still traumatised by the events of WWII. “They’re just little boys,” Rasmussen may exclaim in a clunky exchange, but his fellow sergeant warns that German blood can’t be trusted. The beaches may be a sandy minefield, but the clean-up operation is about revenge. 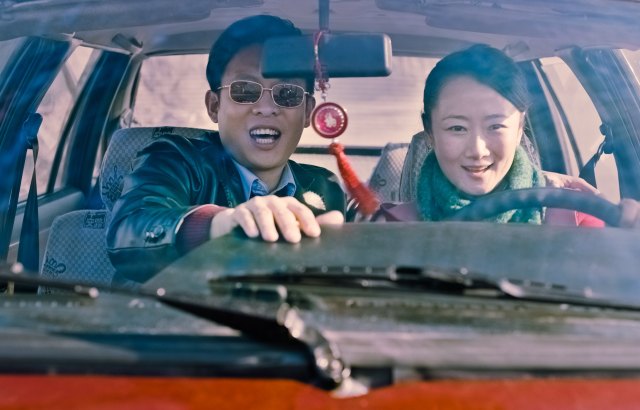 A refrain of ‘Go West’, a Fenyang-born child named Dollar, and a scenic departure to Australia for a Chinese character who only speaks English. The allegories are as subtle as mountains in Zhangke’s three-part story of a family dismantled by capitalism in Asia.

Starting in 1985, Tao (Zhao) jives to the Pet Shop Boys with a chorus that blares like a national anthem. Following that advice is Zhang (Yi), a businessman with sunglasses and a fancy car. Make no mistake, he’s the bad guy. Up against him, as a rival for Tao’s affections, Liangzi (Jin Dong) is a poor, humble coalminer who’s very much the Duckie of the love triangle.

Rather than identify the overlap between Zhang and Liangzi, Zhangke ensures the chasm is vast and Tao’s choice is as much ideological as it is personal. A little thin for 45 minutes, perhaps, but it’s hard to shrug off the looming sadness of money dictating lives, the escapism of choreographed dance scenes, or the cinematic quality of the trio hitting the icy road.

In the middle chapter, it’s 2014, with a time jump signalled by an aspect ratio shift – a trick seen in Nymphomaniac and The Grand Budapest Hotel, and should be compulsory henceforth. Tao is divorced and separated from her husband and child. Liangzi, in an especially moving meeting, suffers from respiratory problems. The mountains have departed, rather slowly with quite a view, although something’s flat in characters that are more broad representations than human beings.

For the final section, it’s Australia and 2025. We know it’s the future because the iPads are different, and inflation sees Dollar as an adult. (For a moment, if you’re an idiot, you might assume so much has changed in the near future that China took a decade to turn itself into Sydney, which is possible, I guess.) The seeds planted in earlier scenes pay off here, rather obviously, and not too convincingly; like an epilogue meant for a post-credits surprise that takes up the final 40-minute stretch. But with such a poetic, lurking spirit of melancholia haunting each gorgeous frame, it’s okay to not see the mountain from the trees. 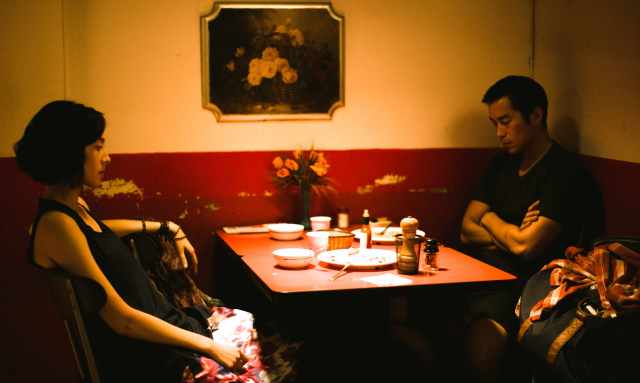 Just as Chang’s magical-realist fable splits into two contrasting titles – I’m guessing Murmur of the Hearts isn’t a direct translation of Nian Nian – so too does its main characters, a brother and sister who lose touch when one is taken away by their mother at an early age. They’re still connected, somewhat, by cringe-y metaphors, coincidences and something to do with mermaids. But taken bit by bit, particularly the sister’s side of the story, an enduring fable flows through to a triumphant finale not really worth the wait.

For me, Hong Sang-soo has been right now, but wrong then. On paper, Right Now, Wrong Then isn’t so different from Our Sunhi or Nobody’s Haewon, neither of which did much for me. Again, there’s a soju-influenced storyline involving a filmmaker and the ripples of time. But by honing in on just two characters, Hong’s latest never lets up, chasing its duo through minor heartbreaks and confessions that are so subtle, the emotional aftermath lingers.

In a way, there are four characters. Midway, the film repeats the chance meeting between a visiting film director (funnily enough, called Ham Chun-su) and a painter who could also use a drink. Rather than an in-your-face Sliding Doors moment of separation, there are no missed trains; just differently phrased small talk that leads to unexpected places. Think of it as alternate takes of the same scene, except the camera’s left to roll each time – apparently they really did get hammered at the bar – and both takes were too good for the cutting room floor.

Emotionally complex and spontaneously funny, the pair share a chemistry of not having chemistry. Two strangers like each other and show fondness, but something’s not there, no matter how much soju they down, or effort they pour into conversation; it requires another timeline to accidentally right a wrong. Plus, while Sliding Doors and My Nobody concern life-altering incidents, Hong is more about the hidden depths of his characters – depending on a choice of words, some of these truer personalities may tragically never be unlocked.

There’s a Seinfeld episode in which Jerry wholeheartedly follows phone advice from a stranger called Donna Chang, then has second thoughts upon discovering she’s not Chinese. That’s partially my reaction after adoring The Great Beauty and Youth, both poetic on the thudding regrets of their ageing protagonists, only to learn Paolo Sorrentino is a 45-year-old whippersnapper. Is “youngsplaining” a word?

Then again, the clue is in the title. Youth may concern two elderly gentlemen reflecting on past memories and the new generation surrounding them, but it’s also about being young and already fearful of what lies ahead. For budding artists, there are two warnings: Fred (Michael Caine) is a composer who stubbornly refuses to work, while Mick (Harvey Keitel) is a director obsessively writing a script night and day. They’re staying at a flashy hotel in the Alps, although with the surrounding idyllic woodland and Sorrentino’s penchant for heavenly imagery, it could be limbo: where wealthy residents idle down infinite corridors, pausing the clock for self-examination and to count those diminishing grains of sand.

Weaving together arresting dream sequences – one involves an orchestra of cows, another a pop music video – and recurring threads of creative regrets, Sorrentino treats his characters as instruments, rather than plot points. A standout is Rachel Weisz as Lena, Fred’s daughter recently dumped by her fiancé for Paloma Faith (“This is the most insignificant woman on the face of the planet,” comments Mick) and later delivers a heartbreaking monologue during a mud massage – where pampered decadence doubles as therapy. Similarly, Jane Fonda only requires a two brief scenes to make her mark; Sorrentino’s visual flourishes are so delicious, a few minutes is all it takes for a memorable role.

“This is cinema,” Mick insists. “Television is shit.” Sorrentino ensures that Youth, as with The Great Beauty, is fare for the big screen, with the sound bouncing around the room like a concert hall. But he also satirises the process, particularly with Paul Dano as an over-sensitive Hollywood star and the uninspiring screenwriting sessions for Mick’s unfortunately optimistic co-authors. Regardless of these oddballs’ insecurities, they will deep down always be able to create, because that’s what true artists do – and Sorrentino, such a natural with the medium, knows it from experience.

For reasons I still don’t understand, Youth was the only film I felt compelled to see again, and on second viewing its messy juggling act was even richer and more rewarding; like getting to grips with a song’s upbeat melodies, only for the morose lyrics to seep in afterwards.

7 Responses to LFF15 Journey and Family reviews: “Youth”, “Mountains May Depart”, “Right Now, Wrong Then”, “Land of Mine” and 4 others…