The 29th instalment of BFI Flare (formerly called BFI London Lesbian and Gay Film Festival) ran this year during 19-29 March. It was fun and a fellow audience member asked if I was an actor.

Films reviewed here: “Atlántida”, “Do I Sound Gay?”, “Futuro Beach” (pictured above), “Girlhood” and “Tiger Orange”. (I also reviewed the opening gala, I Am Michael, in which James Franco plays a gay activist who becomes a pastor who denounces Christianity.)

Follow @halfacanyon for more, and head here to read about BFI Flare 2015. 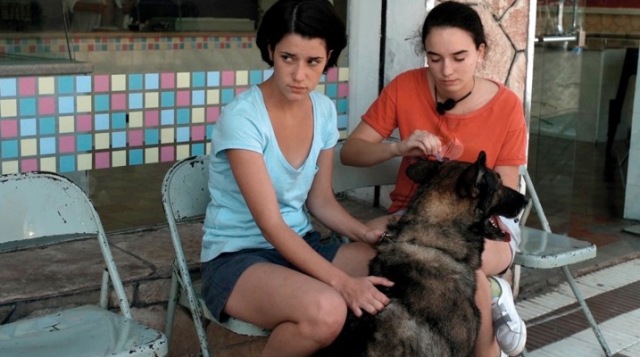 It’s a lazy, hazy day in Argentina for two sisters – one recovering from a broken leg, the other struck by boredom – in Barrionuevo’s nuanced coming-of-age story. Slowed down by sweltering heat, the patient drama luxuriates in half-thoughts and half-encounters on a wasted sunny afternoon – the kind i the mind wanders in an aimless reverie, until you realise a few years later it was treasured memory that will never come back.

Subtly and beautifully shot, the often wordless direction captures emotions that none of its young characters are truly aware of yet – or at least willing to discuss. Despite younger sister Elena’s (Decall) dalliance with a beekeeper (which echoes Alice Rohrwacher’s The Wonders), the more compelling side is with slightly older Lucia (Romero).

Heading out to a swimming pool, Lucia befriends Ana (Zavala) as they hitchhike to a petrol station in a trip that, like the film, cuts out excessive dialogue and opts for a richer visual connection. Without verbal cliches, Barrionuevo latches onto silent stares, angled just correctly, carrying understated feelings and a gradual self-awareness that maybe one uneventful evening in the rain can steer an adolescent path.

Director: David Thorpe
Starring: David Thorpe
“I’ve been comfortable with the way I’ve sounded for years, but it’s like, there’s nothing I can do about it.”

Outside of a weekday 11am Radio 4 slot, Thorpe has the opportunity to fully explore a personal topic that he vaguely justifies as a film through the prism of his own journey – a task of removing the “gay” from his voice, which doesn’t quite add up considering the voiceover was presumably recorded afterwards. But that’s not really the point. Although it’s another doc compiling talking heads, his amiable presence is felt throughout, as he opens up interviewees on a subject matter that’s rarely touched upon by mainstream media.

Well, that’s not entirely true. A montage displays a succession of gags at the expense of stereotypical gay voices – from Louis CK’s “shut up you faggot” bit, to Scar’s effeminate voice in The Lion King – before revealing just how many homosexuals spent their adolescence disguising how they naturally spoke. School is about survival, so lowering your voice is a standard trick for making it to adulthood with fewer bruises. Except those bruises remain, in a not quite literal sense.

But why is there a trend – or at least perception – of how gay men speak? The doc offers no clear answers, other than a convincing argument that discrimination is linked with misogyny. More interesting is the personal tales of coming out, the extent it plays in some men’s everyday insecurities, and how some gay men admit it turns them off – one interviewee criticises gay pornography for occasionally straying away from masculine voices because “it sounds like it could be me”.

The central hook of Thorpe investigating his own voice (hence the title) is so inconsequential, I mostly forgot it existed. He is at least aware (I think) of his own project’s flimsiness and instead keeps the tone humorous and grounded in sincerity. Some sharper insights come from David Sedaris, Dan Savage, and George Takei on his contributions to Howard Stern. It could have been an excellent 15-minute chapter in This American Life.

Divided in three chapters/lanes, Futuro Beach is a moody, evocative love story that travels across eight years, from Brazil to Germany, dipping into the psychology of sunlight and regret. Beginning with a motorbike skidding towards the beach, Aïnouz introduces the eternal waters as a spot of luxury and death. When local lifeguard Donato (Moura) spots two drowning bodies, he’s only able to save one – Konrad (Schick) – while the other is less fortunate. (I’m trying not to use “death” two sentences in a row.) The effect is a slow burn romance between the two men, whose passion for each other could easily be mistaken for the mutual burden of survivors’ guilt.

Once Donato follows Konrad to Berlin, an entire life – a younger sibling and bountiful water – is cast away. The past surprises him one day: do I mean his grown up brother who’s on the poster, or does the beach fly business class to Europe’s hipster city? I won’t give any spoilers. Each scene is beautifully arranged with guilt present in every shape and movement – even a wordless dance in a club or a plaintive stare at German’s lack of Brazilian weather.

When it’s apparent Donato hasn’t flown to Berlin to chase Konrad, but rather escape a watery ghost, the cold German capital is an extreme version of mise en scène: a beach without water is delightfully convenient and evocative of an imperfect second chance.

It seems all French films beginning with Bande will be best remembered for iconic dance scenes. Following the four stages of 16-year-old Marieme (Touré) self-discovery, Sciamma masterfully shoots her central character with sharp precision, fashioning an assured yet vulnerable performance from a non-actor. In her quest to “belong”, she dances with a girl gang to ‘Diamonds”, deftly silhouetted until their atrocious vocals enter the mix. It’s a powerful ending that appears halfway.

Girlhood is largely about building up to those final chapter moments, but not always with a natural rhythm leading up to it – the more dramatic scenes feel very familiar and written, unlike the offhand thrills of girl gangs yelling at each other over a train platform. However, there’s undeniable power about the defiance of black female youths carving their own independence, especially when a trip to a clothes shop sees them followed suspiciously by a white clerk. Sidenote: alternate film title could be Army of One.

My immediate takeaway from Tiger Orange, an earnest dramedy about two gay brothers, was that outspoken Todd (Valenti) must have written the script, but it’s actually the other way round. Perhaps that makes sense. Chet (Strano) is the more sensitive of the siblings who’s less open about his sexuality and is apprehensive about the dating scene. However, his languid days are shaken and stirred by his brother’s homecoming for their father’s funeral.