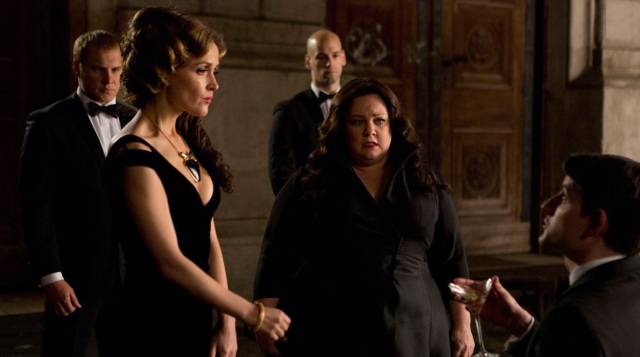 I wrote some other things elsewhere including an “Interview with the lead singer of Songhoy Blues”, “Every Palme d’Or winner at Cannes”, “London Underground as an art gallery” and “A beginner’s guide to Max Landis”. Follow @halfacanyon for more.

I’ve used these guys before. Never again. Unlike Dogtooth, the viewer is kept at a distant, rarely seeing the participants beyond their quirks

Running an overrated sitcom (that’s seen more on tumblr than in actual video form) isn’t enough of an outlet for Dan Harmon, whose weekly live show grew into a podcast. I’ve heard it a few times and, like Community, it has its moments, but I couldn’t possibly tune in more than once every few months. However, Harmon is an over-emotional mess, which is great for docs. I mean, that the most riveting plot arc on Community was Harmon’s drinking problem and how he overworked his writers.

What I really want to hear is an alcoholic with the best job in the world moan for 20 minutes about how life is actually meaningless. But there’s too much “town” and not enough “Harmon”, with ample time devoted to his girlfriend, a comedian sidekick who’s rather dull, a non-comedian sidekick who at least doesn’t pretend he’s not dull, and a drawn out game of Dungeons & Dragons.

The tour footage at least focuses on Harmon’s personal struggles as a functioning attention seeker who drinks too much. Why are they taking the show on the road? For fun, mostly, and a bit of self-therapy, which you wouldn’t guess from how they describe their ordeal with sullen, defeatist expressions, as if valiantly trekking through the desert to save part of the world. No, they’ve taken time off work (a hilarious subplot is Harmon trying to beat the deadline for a network pilot) and have chosen to take a niche podcast to a tiny fraction of the listeners who download the show.

And, because it’s Harmon, it follows the circular plot structure diagram thing he loves so much. No more circles, please.

Without stepping into Life is Beautiful’s territory, Boorman’s childhood memories of London during a World War are tinged with light humour: the curiosity of air raid surroundings, being locked inside, and also not really understanding what’s going on. For a 5-year-old, life’s terrifying realities aren’t brought to the fore – it’s also rather dull for that reason. These children are annoying.

The Memento that doesn’t garner rewatches, unless there’s something wrong with you. (Same kinda goes for Memento, actually – it’s not that good.) Leaving audiences gasping for noé more, Irréversible is the type of film built for festival audiences: it’s challenging, designed to overwhelm an auditorium of shocked viewers, and borderline unwatchable.

And when it came out, anyone who read a single article knew the debate surrounding whether the film – essentially a rape-revenge flick told in reverse – was gratuitous or had a message about the futility of male violence. (The nightmare/nightclub sequence is truly impressive, digging into the blind rage of someone whose head spins like a railway.)

Through general knowledge, I knew everything that came up, even how long that scene would last, which made the whole experience rather obsolete. Was any of it was necessary and what am I doing with my life? The experience of watching it was irreversible. Good film, I guess?

Known for its hefty running time, Love Exposure requires four hours for four warring cults: Catholicism, Zero Church, perversity, and the cult of Sion Sono. The hectic, frequently hilarious soap opera is impeccably paced without a dull moment, taking in life’s greatest themes such as love, religion and whether it’s okay to give up everything you know to join a suspicious cult. Through a horny adolescent’s POV, protagonist Yu is weighed down by a wave of existential angst – a combination of sexual frustration and Catholic guilt – that is bigger than major world issues and can’t be squeezed into a tidy three-act structure.

Yu isn’t just a teen boy with an unrequited crush. He’s a character in a Sion Sono film; his actions and anguish are instructed by extremities that tiptoe along the boundaries of accepted taste. With a priest for a father, Yu is saddled with sexual guilt and develops an urge to sin – the more obscene, the more it makes his father act more like a parent than a Christianity spokesman. The most offensive activity? He trains in the (martial) art of “upskirt” photography, despite finding no sexual pleasure from the activity, and ends up cross-dressing to further escape from his ordained personality.

It’s to the film’s credit that it can be sincere and sweet in places, despite almost every character and subplot being deplorable. The high-octane drama thrives on its own mishmash of emotions by dinking in occasional violence for good measure – the cinematic kind, where every splatter of blood is indicative of adolescent rage against a world they can’t escape. It’s at these low-points that salvation swoops past in the form of religion or a lifetime of sexual perversity; to Sono, both paths are just different sets of rules one must follow to join a community. Ask a confessional booth: both sides wish to be brainwashed by the other.

The originals, guzzling with idiosyncratic humour and memorably offbeat weirdoes, lay down a road that possibly suffers from not witnessing them on a big screen and knowing its near-wordless hero – then Mel Gibson – isn’t quite so wordless in private. Really, the first one struck me as a scattershot comedy, while its direct follow-up is a slow tease, lining up kinda funny distractions before its explosive finale.

Fury Road, however, is a different vehicle, revving with vibrations around a nearly empty cinema screen that continued to empty when fellow viewers vacated after 30 minutes. With superior guitar playing to All is By My Side, the A-to-B-to-A action is jaw-dropping, evoking the unnecessary yet unavoidable thought bubble around my head, perhaps explaining the walkouts behind me, wondering how any of it was possible to a) imagine b) execute c) fund in a studio environment.

A comedy with no jokes. A thriller with no set-pieces. A drama with no raised voices. In barely an hour and almost no dialogue, Kaurismäki depicts one woman’s isolation from the world in one of the darkest examples of his inimitable style. Facing heartbreak, loneliness and poverty, Linis’s only escape is the radio or drinking at a bar; through static shots and silent rooms (her family provide nearly zero conversation), the rigmarole of her daily routine piles on in a distinctly humorous fashion.

The world, it seems, doesn’t find much use for a match factory girl, with an oppressive economic system trying its hardest to ignore the outsiders. So what else can she do?

The essential shot that sums up Kaurismäki is when she’s lying in a hospital. Her father hands her an orange and informs her she’s being disowned and must move out. She peels and eats the orange in silence. It’s funny, tragic, and doesn’t require any words.

Ozzzzz-slow, August 31st. No wonder he turned to drugs. Well, I guess that’s the point. Much, much prefer Le feu follet.

Skateboards are dangerous – not just for the person impersonating Tony Hawk without a helmet, but for passersby within whacking distance. That’s a strange lesson to take from Paranoid Park, an elegiac dip into the emotional state of teen wracked with guilt and the realisation he’s all alone. My favourite shot, aside from the Elliott Smith bits, is when his mother enters a room to question why he’s behaving so weirdly. She’s perched at the door, keeping her distance, as if she shouldn’t have to still be dealing with his shit. The nightmare never ends, continually getting worse – the non-chronological narrative ups the flashbacks, playing over and over in a 16-year-old whose life is already ruined. 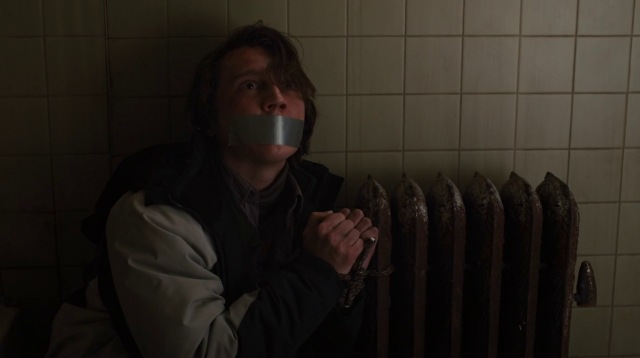 Zodiac by Fight Club Fincher. Watchable as a precursor to Gyllenhall’s animal phobias in Enemy, but I also got a sense that the religious themes were mainly afterthoughts: someone punching up the script and adding, “I did it for God!”.

When Katherine Heigl criticised Knocked Up for sexism, specifically its portrayal of women as killjoys, she was unfairly vilified by the media and co-stars who labelled her as difficult, hypocritical, and ungrateful. Yet, does anyone disagree with her statement?

The big box office comedies of recent years – Bad Neighbours, 21/22 Jump Street, The Hangover 1/2/3 – indicate such a drought of female-led ensembles, it’s practically cliché to mention Bridesmaids as a worthy exception. But Paul Feig, after directing Bridesmaids, passed the Bechdel Test with The Heat and now with Spy he brings Melissa McCarthy along again.

Feig may have directed and written Spy, but it’s undoubtedly a Melissa McCarthy movie. Since Bridesmaids, in which she earned an Oscar nod for a role that involved shitting in a sink, McCarthy hasn’t quite had a part to suit her acting talents (I wasn’t so hot on The Heat), until Spy, a relentlessly silly espionage comedy that breaks all the rules of being a spy comedy: it’s funny, the secret agent is a woman, and its humour isn’t just in amplifying outdated James Bond misogyny.

McCarthy plays Susan Cooper, a desk assistant to slick spy Bradley Fine (Jude Law); when Double O Fine traipses around enemy territory, Susan views the action through a hidden camera and advises him on everything, effectively masterminding the mission from her swivel chair. She’s also timid, a walkover, and not the motormouth hothead McCarthy traditionally plays. Well, until her boss (Allison Janney) uncovers footage that suggests otherwise – not rants from Tammy or Identity Thief, but Susan as a raging CIA trainee. She then, a la The Other Guys, swaps the office stapler for a pistol. Her mission: track down arms dealer Rayna Boyanov (Rose Byrne) and prevent the sale of a nuclear bomb.

The nonsensical story is excused with a rapid onslaught of twists and quips in what’s surprisingly slick for a comedy. Feig, rather than straight-up parodying the genre, plays along, adding punchlines as sharp as the kitchen knives that always seem to be lying around. 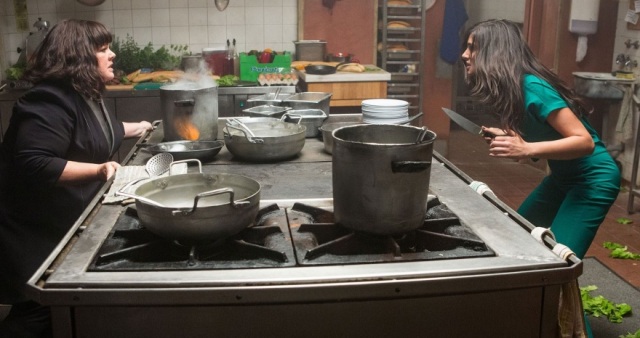 Jason Statham willingly mocks his own action hero image as Rick Ford, an incompetent, foul-mouthed agent who doesn’t trust Susan because she “looks like Santa Claus’s fucking wife”. The Stath is a bit one-note, as is a 50 Cent cameo as himself, with both droll like non-comic performers feigning a sense of humour. Luckily, Rose Byrne is typically deadpan as a snobby villain – imagine her Bridesmaids character organising nuclear destruction rather than a wedding. So too is Jude Law, who could play James Bond for real one day.

However, stealing scene after scene is – this will come as a shock – Miranda Hart as Susan’s clumsy sidekick, Nancy, who delivers the same kind of pratfalls that usually make Miranda unwatchable. But as the pivotal cog of a high-budget action romp, it works, adding to what’s also a sly critique of Hollywood: strangers regularly comment on Nancy and Susan’s inappropriateness for a spy caper, with the latter offered personalised gadgets disguised as haemorrhoid cream and a night vision watch honouring Garry Marshall’s Beaches.

At the very least, Spy includes one of the few vomiting scenes I’m happy to see on a big screen, certainly up there with K-Stew’s in Clouds of Sils Maria.