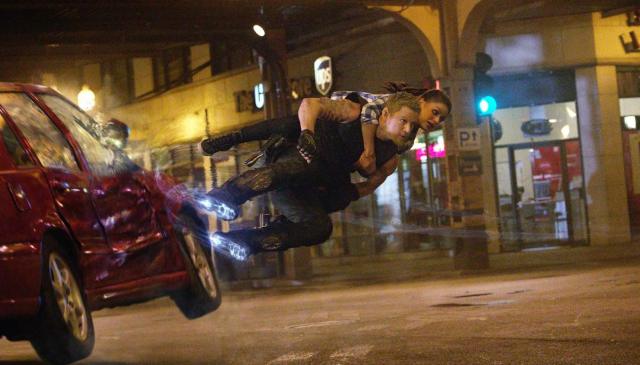 If you want to see a princess be rescued by a dog-person on a flying surfboard, you’re in luck: the Wachowskis have blown a few credit cards on a baffling space opera that’s far, far stranger (and sillier) than the posters suggest.

At the centre is Jupiter Jones (Mila Kunis), a poor Russian cleaner who’s informed by aliens (and bees) that her DNA makes her the queen of planet Earth – her name, it seems, is a red herring. But being an heir isn’t all crowns and fancy dresses. Through sheer misfortune, her genes match up exactly with the deceased mother of an evil trio of alien siblings – Basem (Redmayne), Titus (Booth) and Kalique (Middleton) – who wish her dead for inheritance purposes.

The story, somewhat harder to follow than Inherent Vice, leads to Jupiter being whisked away by an unofficial prince, who comes in the form of Caine – a mixture of dog and human, but looking like Channing Tatum with a beard and humourless expression. His skills involve a strong sense of smell, canine loyalty, and dexterity when it comes to punching a dinosaur in the face.

From then on, it’s best to just marvel at the visuals and ignore any dialogue that isn’t memorably bad (“Bees are genetically designed to spot royalty”). The set-pieces zip and out of intricately designed buildings and alien cultures, which no doubt were at the heart of the Wachowskis’ reason for constructing Jupiter Ascending.

This is as, unlike the emotional resonance of Cloud Atlas, the only depth on show is the 3D. The limp fairytale aspect is half-heartedly supported by Jupiter’s notion that love can be summed up in moronic aphorisms, and by the end she’s more Barbarella than Cinderella. Kunis is also particularly guilty of flat line-readings clearly redolent of someone given the impossible task of reacting to four walls of greenscreen. She’s not the only one, but at least Redmayne forms his own unique brand of over-the-top acting – something like the quiet/loud/quiet formula made famous by Pixies and Nirvana. And, in a bloated fantasy this ridiculous, Redmayne’s pantomime yelling suits the soapy drama.

It’s noted that time is the single most valued commodity in this universe, which was true for the Wachowskis when the theatrical release was delayed by six months to enhance the special effects. The additional CGI layers (impressive in IMAX 3D) were presumably vital so that the idiosyncratic architecture could compensate for the shallow story and misjudged performances. But with sci-fi this ludicrous and full of bee-related subplots, it’s hard to not be somewhat entertained to the end.