LFF16 Debate, Documentary & First Feature Competition reviews: “Nocturama”, “Sierenavada”, “My Life as a Courgette”, “A Date for Mad Mary”, “Divines”, “Stopover”, “The Unknown Girl” and 6 others…

Films reviewed: “A Date for Mad Mary”, “David Lynch: The Art Life”, “Divines”, “Graduation”, “Lo and Behold, Reveries of the Connected World”, “My Life as a Courgette”, “Nocturama” (pictured above), “Playground”, “Porto”, “Sierenavada”, “Stopover” and “The Unknown Girl”. 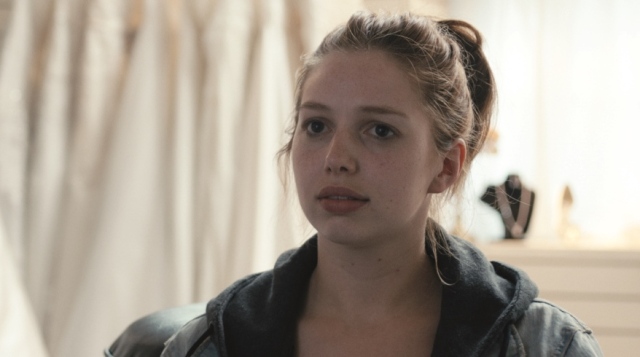 Sometimes a film title doubles as a litmus test, even if the choice of words is deliberately misleading. Released from a six-month stint in prison, Mary is no longer “Mad”. In fact, a more apt moniker would be Morose Mary, given her lack of enthusiasm for a new life chained to a fast food counter and receiving dirty looks from former friends.

As a character study, Thornton’s feature debut starts off promisingly. Kerslake, as Mary, conveys the stoic behaviour of someone who’s drained of emotion on the exterior but still bubbling with fury inside. You could place her anywhere, even if it’s just doing house chores, and the rhythm of her routine is of some interest.

But then there’s a ridiculous sitcom-esque turning point when – here comes the title – Mary requires a date for her one-time BFF’s big, fat wedding. Simply put, the gags are weak and chip away at the dramatic moments. Kerslake, based on her performance, deserves a better script and better co-stars.

The separation between old Mary (a violent drunk we only see glimpses of) and new Mary (dull and sarcastic) is what keeps the film alive, asking viewers to spot signs of a potential loose cannon. However, viewers are also asked to put up with a laborious wedding subplot, which leads to an abrupt ending and a “that’s it?” response when the credits appear.

David Lynch conjures up movies that electrify the soul, he jams with musicians ranging from Lykke Li to Karen O, he’s responsible for a damn fine beverage known as David Lynch Coffee, and lately he’s been directing, shooting and editing a new season of Twin Peaks. But in his heart, Lynch is really a painter. At least, that’s the takeaway from David Lynch: The Art Life, a surprisingly revealing documentary unveiling its subject’s artistic evolution from childhood to Eraserhead. 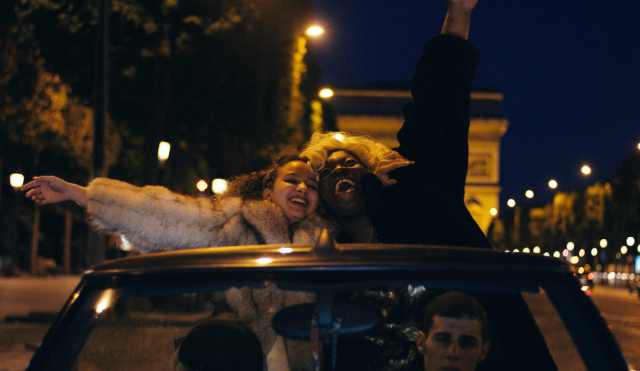 Yes! It’s Girlhood with gags. Amamra, someone I wasn’t familiar with before, deserves to make it big. Really, aside from the clunky side-to-side dance/abuse sequence (seriously, what was that?), this is a welcome blast of subtitled energy about life in the banlieue – with the crime genre’s gender roles subverted as a bonus. 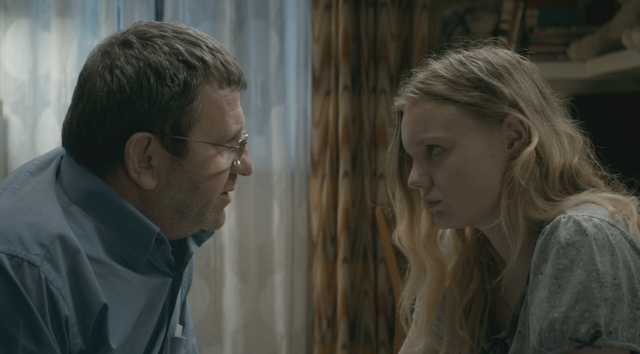 There’s a shout-out for Kensington gardens and its squirrels. You can read my thoughts on this in March when my interview with Cristian Muungiu gets published.

Lo and Behold, Reveries of the Connected World – 6/10 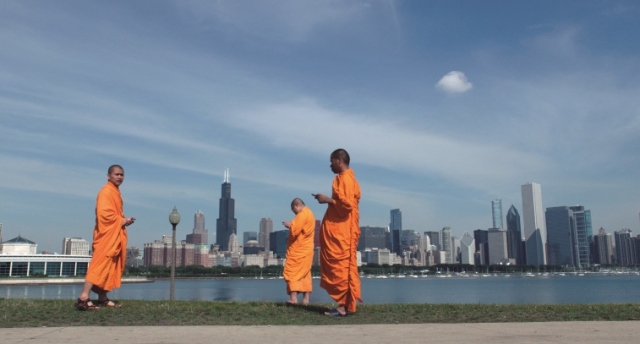 “I’m not a fly on the wall,” Herzog told Richard Ayoade at the Q&A. “I want to be the hornet that stings.” Lo and Behold, a chaptered guide to sentient technology, isn’t up there with his greatest work, and much of it is played more for laughs – he sat in the row in front of me, then commented afterwards that he enjoys seeing the ripples of laughter in the audience for his films.

On the positive, it’s the kind of exploration only Herzog could do. Who else would ask Elon Musk for a one-way ticket to Mars? Still, it feels a bit rushed and lacking in the usual Herzog fire – either from a volcano, or in the determination seen in Burden of Dreams when he tells the cameraman he’ll live or die with Fitzcaraldo.

A sweet sixty-six minutes, this stop-motion coming-of-ager is a tender trip in and out of an orphanage. Icare, nicknamed Courgette, is a heartbroken blue-haired kid (no, he’s not Milhouse) who gets acquainted with his new, parentless friends. Forming a makeshift family, the gang are a delight to hang around with, particularly on snowy adventures and fairground rides, with all their emotional trauma handled deftly throughout by Sciamma’s sensitive script.

Here’s a teen movie with an explosive twist: they’re all terrorists. Originally titled Paris is Burning, Bonello’s perversely sexy thriller engages in the adrenaline rush of youngsters blowing up various buildings around the city. The action unfolds in stylish split-screen, and mobile phones are disposed in ultra-cool slo-mo. It’s exhilarating and horrifying. “The city’s on fire,” someone notes. “It’s war.” But who’s fighting who?

Though anti-establishment sentiments are hinted at and one of them has Slate bookmarked in his browser, the general motives are vague. There’s little political engagement beyond sympathy for a homeless couple, and in a shopping centre hideout their conversation is more focused on clothing brands and Willow Smith. As for regrets, they also know, like journalists, not to read the comments. Out come the masks from House of Tolerance. The body toll? Best not to ruin an evening worrying about it.

Still, the fiery operation is an undoubted feat of intricate skill, bravery and planning. They know their actions were ethically reprehensible, but also that everything that follows in adulthood – if they survive the night – will be insignificant in comparison.

Bonello, keeping at an icy distance, allows the moral mechanics to work its way through the drama, while ensuring the aesthetics are unsettlingly alluring. However, with the consumer contradictions, the film can’t resist turning a fashionable teen into a punchline when he recognises his outfit on a mannequin. Advertising, it seems, will always be louder than bombs.

That Playground takes inspiration from the Jimmy Bulger case is not a spoiler but a warning. Of course, the grim and, frankly, dull misery-porn is not a literal translation; the horror unfolds in Poland in the present, with a few scenes lamely connecting mobile phones to the psychological impact upon two young bullies.

Playground has prompted walkouts across festival screenings, which is likely what the directors intended. Some might just have been bored. Even with the film’s consistent tone, the pivotal scene – ie the one you know that’s coming – is kept at a distance in a fixed shot lasting several minutes. It’s all very composed, deliberate and ultimately self-defeating, if there was a purpose to begin with.

A brief moment of interest arrives halfway when, from the kids’ POV, they’re surrounded by adults – judgemental zombies, really – who stare in disgust, as if they’re not human. It’s a warped vision that sidesteps what we’ve seen before, and it lasts 30 seconds. The rest is just stale provocation.

On 35mm, Porto looks gorgeous. The warmth of the grains is instantly nostalgic, building upon the memories of a one-night stand that won’t fade away. Also faultless is the lead duo who slot into the film’s musicality and playful rhythms. Where it falters is the script (some of the dialogue…) and circular structure that replays the same evening from multiple POVs which results in stale repetition. A shame, really – but if you can get over that hurdle, it’s quite a debut feature.

Director/Writer: Cristi Puiu
Starring: Mimi Branescu, Judith State, Bodgan Dumitrache
Strand: Debate
“You know, this all started when I said the priest is a jerk.” 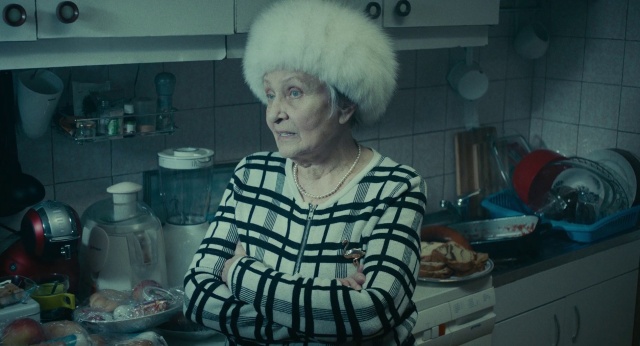 Horror films will often kick off with a murder in the cold open to forewarn viewers of what to expect. If you can’t stand blood and guts, don’t watch Halloween or Heal the Living. For everyone else, get ready for a ride… that won’t live up to that gnarly start.

In Piui’s jokingly (mis)titled Sierenavada, the first scene is a drawn-out shot of someone walking in the distance, looking for a parking spot (or something equally mundane – whatever happened wasn’t memorable). There’s another three hours, and trust me, this is a film that feels like three hours.

The claustrophobic affair mostly takes in one house when mourning relatives gather for a commemorative meal. They argue over 9/11, unravel not-so-secret philanderers, and there’s a drunk girl who needs a bedroom to vomit in. These ingredients are stirred in a carefully calibrated pot, with Piui dipping from room to room – often without breaking the shot – to create a universal sense of helplessness.

If The Funeral of (Not) Mr Lazarescu justifies its time, it’s only in the sense that anything can be funny when it’s repeated for long enough. By the end, like its characters, you just have to laugh. 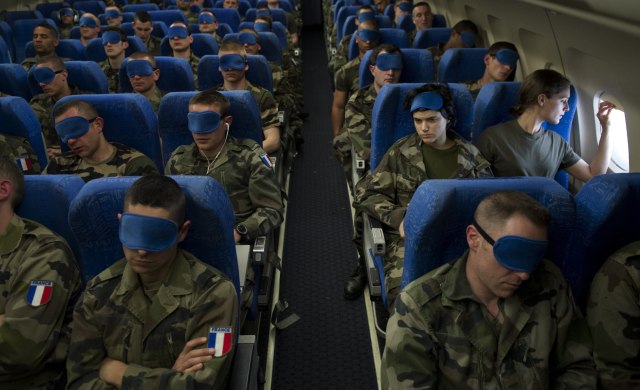 Here’s a fascinating premise. Marine (Soko) and Aurore (Labed) are two female soldiers of a mostly male army unit resting at a 5-star hotel in the Mediterranean. The three-day stay, it turns out, is for “decompression”, which is basically a compulsory exercise for those suffering with PTSD. This entails regular group therapy sessions (as tense as you’d imagine) followed up by loosening up with booze by the pool. It’s an emotional cocktail that promises dramatic results.

Of course, it’s the sexual politics at the film’s core, especially with how Marine and Aurore adapt to (and ignore the misogyny of) an overwhelmingly masculine environment. When some handsome, anti-soldier locals get to know the women, the repressed emotions can stay repressed no longer. Oddly, the resultant final act, which should be gold, is a bit clichéd, but overall it’s the kind of above-average character-driven indie Labed’s been signing up for in recent years.

The Dardennes do Colombo. Adèle Haenel is superb, and Jeremy Renner is unrecognisable from his Marvel films. Jenny (Haenel), a doctor, feels responsible for a death she could have prevented just by opening a door. Though no one’s pointing the finger at her, she sets out to solve the mystery, driven by her own guilt. Only two days, one night later did I realise the wider context and how it reflects us all.

7 Responses to LFF16 Debate, Documentary & First Feature Competition reviews: “Nocturama”, “Sierenavada”, “My Life as a Courgette”, “A Date for Mad Mary”, “Divines”, “Stopover”, “The Unknown Girl” and 6 others…